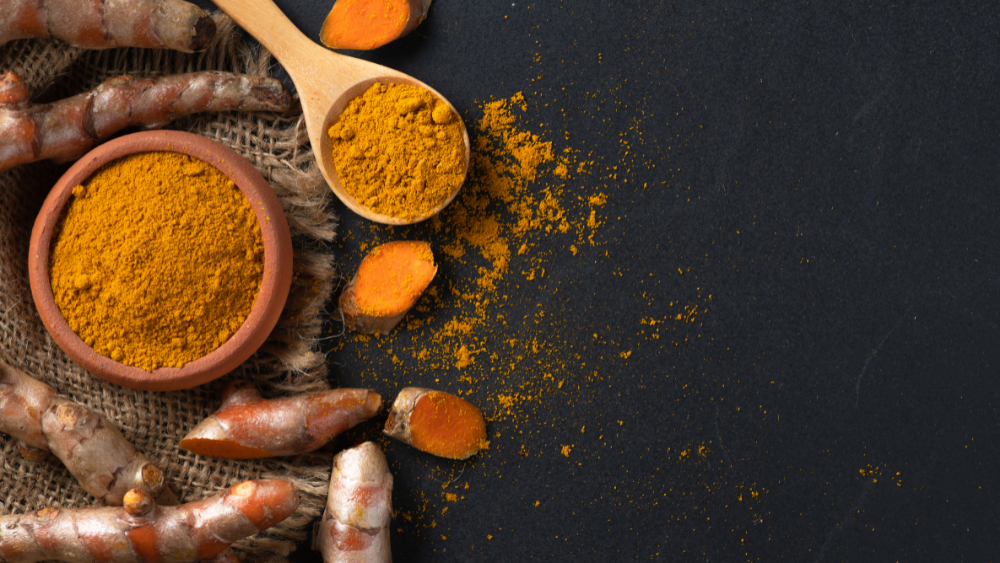 Turmeric may just be one of the most effective supplements out there. This is why we include it in our CBD formula.

Numerous studies have shown that turmeric can offer several health benefits. Many of these can be attributed to turmeric’s main active ingredient, curcumin.

Today, we cover 6 benefits of turmeric, with scientific studies to back them up.

What is turmeric and curcumin?

If you wanted a quick overview of what turmeric is before diving in, don’t worry, we’ve got you covered.

Turmeric is a root. It’s slightly like ginger in appearance, but typically thinner and darker. On the inside, it has a deep yellow. This strong pigment can stain clothes and even countertops, so if you’re cooking with turmeric, do be careful!

This yellow is also what gives curry its color. Turmeric has been used in India for thousands of years as a culinary spice, in religious ceremonies, and medicinally. It has even been used in the ancient medicinal practice of Ayurveda.

Recently, science has begun to confirm the medicinal use of turmeric and the root’s powerful compounds. [1]

These compounds are called curcuminoids, with the most notable and important one being curcumin. Curcumin is a powerful antioxidant with very strong anti-inflammatory effects.

Read on to discover just how strong curcumin can be.

Inflammation is an integral part of your immune system, fighting off foreign invaders and repairing damage in the body. However, sometimes inflammation goes too far and attacks the body’s own tissues. This is known as chronic inflammation, and it plays a role in many health conditions.

From heart issues to cognitive decline, chronic inflammation can lead to many of the worst known diseases. [2, 3, 4]

This is why fighting inflammation and providing your body with tools to help manage your body’s inflammatory response is so important.

Studies done on turmeric’s active compound, curcumin, have shown that it can be quite beneficial in fighting inflammation. [5, 6, 7]

2. It acts as a powerful antioxidant

Free radicals are unstable molecules with unpaired electrons that can cause damage to proteins, fatty acid, and DNA. This damage is known as oxidative stress.

They can also wreak havoc by creating even more free radicals in the body.

Antioxidants neutralize these free radicals by lending them an electron without destabilizing themselves. This prevents oxidative damage and the disease-causing inflammation that may arise as a result.

Curcumin is a potent antioxidant, easily able to neutralize free radicals due to its chemical structure. Additionally, research has found that curcumin may also block the action of free radicals, and even stimulate other antioxidants. [8, 9]

3. It can boost brain health

It was once believed that neurons couldn’t multiply after early childhood, but now researchers understand that the opposite is true. Neurons can form new connections and, in some brain regions, even increase in numbers.

This is thanks to brain-derived neurotrophic factor (BDNF), a gene involved in making a protein that’s responsible for promoting the life of neurons. This BDNF protein is attributed to learning and memory. It’s also found in regions of the brain responsible for eating, drinking, and body weight. [10, 11]

Many common brain disorders have been linked to low levels of BDNF protein. [12, 13]

How does this relate to turmeric?

As it turns out, studies have found that curcumin may increase BDNF levels. [14, 15]

Due to this, turmeric and curcumin may be able to reduce the risk of cognitive decline and other brain-related health issues, as well as increase memory and attention levels. [16, 17, 18]

Reduced levels of BDNF has also been linked to symptoms of depression. It’s no wonder, then, why studies have found curcumin to be able to alleviate some of these symptoms. Researchers have also seen that curcumin may boost brain neurotransmitters serotonin and dopamine. [19, 20, 21, 22]

Additionally, curcumin has been shown to reduce the inflammation, oxidative damage, and amyloid plaque buildup that can cause cognitive decline. [23, 24]

Turmeric and curcumin have been shown to boost the health of the heart in several ways. Mainly, it has been shown to improve the function of the endothelium, the cells which line the inside of the blood vessels. [25, 26, 27]

Poor function within the endothelium is a large driver of declining heart health. This can impact the regulation of blood pressure, blood clotting, and various other functions. [28]

Several studies have shown that curcumin can improve the health of the heart, with one study finding its effect on the endothelium to be as effective as exercise. [29, 30, 31]

Additionally, turmeric and curcumin can promote the health of the heart due to its antioxidant and anti-inflammatory properties. [32]

A major problem many people face is inflammation of the joints. This can cause discomfort and pain that can leave people missing out on activities they used to enjoy.

Seeing as turmeric acts as a powerful anti-inflammatory, it makes sense that it can ease this inflammation.

Studies on curcumin and joint inflammation have found that the compound can be as effective as mainstream treatments, improving symptoms of the condition. [33, 34]

Inflammation and oxidation are believed to play a major role in the rate at which the body ages. As such, curcumin can have anti-aging effects. [35, 36]

Since turmeric and curcumin can benefit the heart, brain, and other systems, it can support longevity and quality of life as well. [37]

Turmeric has been used for thousands of years, with some speculating that its use could date back at least 8,000 years. It didn’t stick around for no reason. People all around the world used this powerful root and realized its medicinal properties.

Over 3,000 publications from the last 25 years show that this compound is far more than just a fad or trend.

This is why we’ve put it into our Liposomal CBD Turmeric blend.